Appearance: Rocky is a robot with black grey and white colored metal to fit his original look. (see picture below for his original look) he wears a Cowboy Hat a red and white stripped shirt. A brown leather jacket a red scarf. He wears jeans as well and always has a cigarette or cigar in his mouth. He also has a belt with many pouches that hold his cigarettes and ammo. (see second image below)

(Think of these images only instead of fur it is metal) 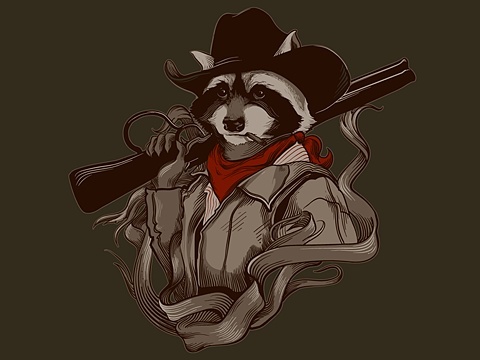 Species: Animal (North American raccoon)/ Robot
Faction: The Eggman Empire
Languages: English
Inventory: Rocky wields a lot of weapons given his expertise in espienage and explosions. He has his signature pump action shotgun all the time, a winchester rifle, he has his claws turned to sharp metal blades, a knife, many different explosives, 2 magnum revolvers, a flamethrower, flashlight eyes, jet feet. He has standard robot armour, He often uses several hacking tools. He carries no food as he does not need it being robotasized, He still smokes so he has a pack of cigarettes and lots of ammo on him at all times. He does not use all his weapons at all times I will tell his loadout when I start a match

Biography: Born an orphan as his mother died in child birth and his father left long ago and was never seen again (as he changed his name etc) Rocky was always on his own. However the orphanages owner was a cruel woman who essentially forced them to learn that life was cruel and that there was no one they could trust but themselves. One day Rocky found a Remington Model 870 Pump Action Shotgun in a dumpster. Taking it home to play with it the cruel owner startled him and he accidentally shot her in the face. Scarred he ran off and began living in the streets. As he grew up he tried to find a way out of the gutter and found a homeless shelter helper (a raccoon) named Shirley. They became close and soon fell in love. As they grew closer Shirley suddenly died in an attack by criminals at a grocery store. With his life completely ruined he ran off once more. During his whole life he was a genius with engineering an weapons and soon became an expert at espionage, explosives and hunting. He was hired as a bounty hunter and mercenary for hire. One day Doctor Eggman came across Rocky and offered him a place in his empire. Rocky asked for one thing in return. He wished to be free of the pain of the world to which Eggman agreed and robotasized him leaving his intelligence and from then on Rocky could not fully trust Eggman but none the less was loyal to him and did anything that Eggman ordered. He became one of Eggmans greatest assets.

RP Sample: Rocky was sent by Eggman to collect data from a facility. Rocky brought his shotgun his 2 magnums his claws (obviously), his knife and many plastic explosives and grenades. He snuck in from the roof with cigarette in mouth and crawled around through the air vents. He came out saying quietly "Well that was as fun as a rattle snake bite." He would sneak into the data room avoiding the security personal but as he was downloading the data a researcher entered the room and began calling for help. Rocky Immediately pulls out his shotgun and blows the scientist away saying "Jeez with all that hollering you sounded like a dang hound." With the data downloaded and the security on its way he rigged the computer to explode with plastic explosives and left through the door heading towards the air ducts. Blocking his way was the security to which Rocky said "Well Looks like I have been spotted. I guess you boys should learn to run then." Rocky then threw a grenade at them and watched as the security scrambled and the grenade blew up saying "Well Looks like you still need to work on that." ran into the air ducts. Coming out on the roof there were 4 security officers up there investigating to see if Rocky was up here. When they see him Rocky simply pulled out his magnums and shot them all down saying afterwards "Well that was more annoying than a porcupine in the pants." Suddenly a helicopter appeared and shined its light at him. He reacted by shooting at it with his shotgun and then hid behind cover saying "Of course there has to be a helicopter. What was I thinking Eggman never sends me on the easy jobs." Rocky threw a line onto the helicopter and climbed the line into the copter he used his claws to kill the crew and left a grenade in it as he jumped out. Rocky then activated the plastic explosives he placed on key points of the building earlier and detonated them causing the building to begin collapsing. as the building teetered just as he planned it with the explosives he leaped onto another building that the building he was on was passing by and lit a new cigarette saying "No THAT was more annoying than a porcupine in the pants. Jeez."
Admin

Re: The Ace Of Spades Character

((Accepted, and did I notice some form of a catch phrase there XP))