Appearance: Ace is covered in black and white fur (see image below), He wears Ski Goggles a long Red Scarf. He wears a jacket and a short shirt underneath it. He wears camo khakis and shoe like work boots. He also had wrist bands on both wrists 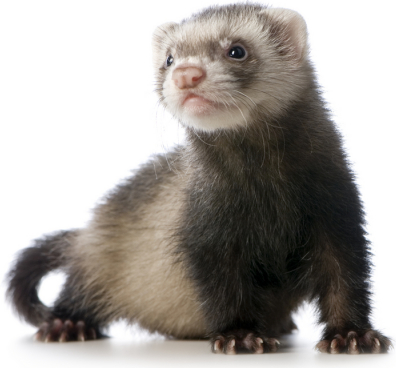 Species Animal (White Ferret)
Faction: Freedom Fighters
Languages: English, Swedish
Inventory: He has but one weapon but unlike his brothers who use a sniper rifle and a bow respectively he uses his compact Slingshot, A bit of military padding on his jacket, he carries his supplies in his backpack often he holds beef jerky in his backpack.

Biography: Ace's brothers were both part of G.U.N. as snipers but Ace did not like how G.U.N. operates and they would not take him given he used a slingshot. He spent years perfecting his art of long range slingshot accuracy making himself a master of scouting and surveilence. He was one day saved by the Freedom Fighters when Doctor Robotniks henchmen caused ace to be trapped under rubble. He then decided to join the Freedom Fighters but had no idea how to impress them. De decided to scout them out and eventually showed his skill to them. Impressed the Freedom Fighters accepted him in. He has been with them ever since working as surveilence and sniper for them.

RP Sample: Ace sees his target Tails inside a house with his binocilars. He has been scouting him for days and has mapped his daily movements. He opens his bag and begins eating his beef jerky. Today is the day he will get his revenge on Tails. He reaches into his pack and pulls out his Slingshot. He takes aim at his target with ammo in hand. He is several meters away from the house in a tree in the park. Sweat falls from his forehead as he readies himself mentally to take the shot. He take a big gulp and stares down the area with his aiming monacle. He pulls the strap on the slingshot and shot a rubber ball right into the back of Tails head. Tails says "Ow what was that." Ace stand up and screams out loud "That was for stiffing me on the bill at olive garden HA!"
Admin

Re: The Ace Of Spades Character