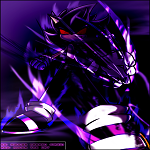 Faction: The Order of Ixis
Race: Wolf-Dog Cur
Languages: Unknown at the moment

Inventory:
Nothing but his glooves

1st Spell: Lupis Magna Mutatio
Hunter's most used spell that does not incorporate any element. Instead, this spell changes him into a true ancestor. A true ancestor is a being that existed long long ago from his bloodline. Something that is now extinct and unlocks the dormant side of himself. It is similar to Sonic's werehog transformation. (Look at Transformation for more information)

2nd Spell: Ragora Nobus
A wind element spell that sends a powerful blast of winds to knock target opponents back. This wind usually comes out of the mouth of the user. It is commonly believed, the louder one yells while using this spell the more effective the spell is.

Biography:
Gavin is a wolfdog which means he is a halfling of a wolf father and a dog mother. It is rather taboo for this offspring to see the light of day. Therefore, he had always been somewhat of a drifter unable to find a home. To this day Hunter remembers very little about the place he was from only his name. The Order of Ixis took interest in him as this combination of heritage was rare and valuable because only a wolf dog is able to use the Lupis Magna Mutatio Spell. Under Mamoth, he was educated in order to use magic. However, Nagus had used his magic to erase all of his memories and most of his arcane power. Therefore, Hunter began the Order of Ixis guard dog for Nagus. He listened to what they say and he gets rewarded with food, bones or scraps. Hunter is quite ravenous even for being part wolf, he always seemed to be hungry. Hunter's missions and lack of care lead to many psychological problems. He can not speak and can barely understand speech. He is always driven by instinct rather than rational thought. There are moments where he seems sentient but, those are short. He spends his days serving his master's demands and waiting hungrily in the dark.

Racial traits: (As you said racial traits can vary depending on the species)
1) Can only maintain form during night
2) Intelligence, Wisdom and Charisma are all turned to zero and all remaining points are divided into strength dexterity and constitution.
3) Extending Limbs

Re: Hunter The Wolfdog Berserker