Sonic is described as a character who is "like the wind": a drifter who lives as he wants, and makes life a series of events and adventures. Sonic hates oppression and staunchly defends freedom. Although he is mostly easy-going he has a short temper and is often impatient with slower things. Sonic is a habitual daredevil hedgehog who is honest, loyal to friends, keeps his promises, and dislikes tears. He took the young Tails under his wing like a little brother, and is uninterested in marital proposals from Amy Rose. In times of crisis, he focuses intensely on the challenge as if his personality had undergone an astonishing change.

Sonic is known as the world's fastest hedgehog. Sonic's greatest strength is his running speed, which is faster than the speed of sound, he averages 798 mph. Many of his abilities are variations on the tendency for hedgehogs to roll into tight balls for protection with the addition of spinning his body.

MAIN ABILITIES:
Spin Moves:
Sonic's primary offensive maneuver is the basic "Spin Attack". Later games in the series expanded on this basic attack and two of these enhancements have become mainstays of his: the Spin Dash which involves Sonic spinning on the spot before blasting off at full speed, and the Homing Attack, in which Sonic dashes toward a target in mid air. Sonic's only weakness is that he cannot swim, sinking like a rock if plunged to a deep body of water. However, he can overcome this by running on the surface of water.

Super Form:
When the seven Chaos Emeralds are collected in most Sonic games, Sonic can initiate a Super transformation into Super Sonic, a faster and invulnerable version of himself that can fly. While transformed, Sonic slowly loses Rings during the time he is in Super form (usually about one every second) and returns to normal when all the Rings are used up. This returns him to peak physical condition regardless of his state before transforming.

The G.U.N. Commander (also known as the General) is a human military leader. He is the G.U.N. Federation's highest ranking commander and also one of the most respected. During his childhood, his family was aboard the Space Colony ARK, and he befriended Maria Robotnik and witnessed the creation of Shadow the Hedgehog. After the ARK was invaded by G.U.N., the Commander blamed Shadow for his family's death and carried a grudge for fifty years. He finally discovered the truth about Shadow and Gerald Robotnik, the latter of which he considered insane. He now leads G.U.N. in homage to Professor Gerald and even tried to make amends with Shadow.

King Elias Acorn is Sally Acorn's older brother and heir to the throne of the Kingdom of Acorn and was thought dead for many years by their father Maximillian Acorn. Having been sent away from the Kingdom for his own protection prior to Dr. Ivo Robotnik's takeover, Elias ended up being raised by the Brotherhood of Guardians after the ship carrying him and his mother to safety crash-landed on Angel Island, killing everyone but Elias, his mother Queen Alicia Acorn, and a loyal officer, with the queen ending up in a coma. Elias would become an adventurer, searching Angel Island for years before finally returning to claim his throne thanks to the Royal Secret Service. However, the tension of ruling proved too much for Elias, and he left to start life anew elsewhere. To this end, he started a family with a fellow squirrel named Megan, falling in love, later marrying her and being the adoptive father to her daughter, Alexis Acorn. Prior to this, Elias was reunited with his family, once again thanks to the Secret Service, but refused to take back the throne. He would later rescind this decision and take Max's place as king, and though his reign has begun shakily he has shown great promise as a ruler.

Vector the Crocodile is one of Knuckles the Echidna's oldest friends and the de-facto leader of the Chaotix. Having lived with the Guardian on Angel Island and made his acquaintance after what Knuckles thought was the death of his father Locke, Vector was the first Mobian to join Knuckles as an ally in combat. When the likes of Espio the Chameleon, Charmy Bee, and later Mighty the Armadillo offered their assistance, together they formed the Chaotix. He has since remained a stalwart ally of Knuckles and later the Freedom Fighters, leading the Chaotix into battle against some of Mobius' greatest evils. Originally, this involved defending Angel Island alongside Knuckles, but has since expanded to include the war against Dr. Eggman.

In some cases Vector can even manipulate sound waves to use as weapons, but he relies heavily on his experience and super strength.

Prince Charmy Bee is the prince of bees of the Golden Hive Colony. He felt pressured by his upcoming royal responsibilities and ran away from home, making his way to Angel Island. He found himself becoming a member of the Chaotix and assisted the group on Angel Island for a time before returning home. He is with his fiancee Saffron most of the time.

Charmy is energetic and very charismatic. He is both a fighter and a lover, but always seems to rush into things before thinking. 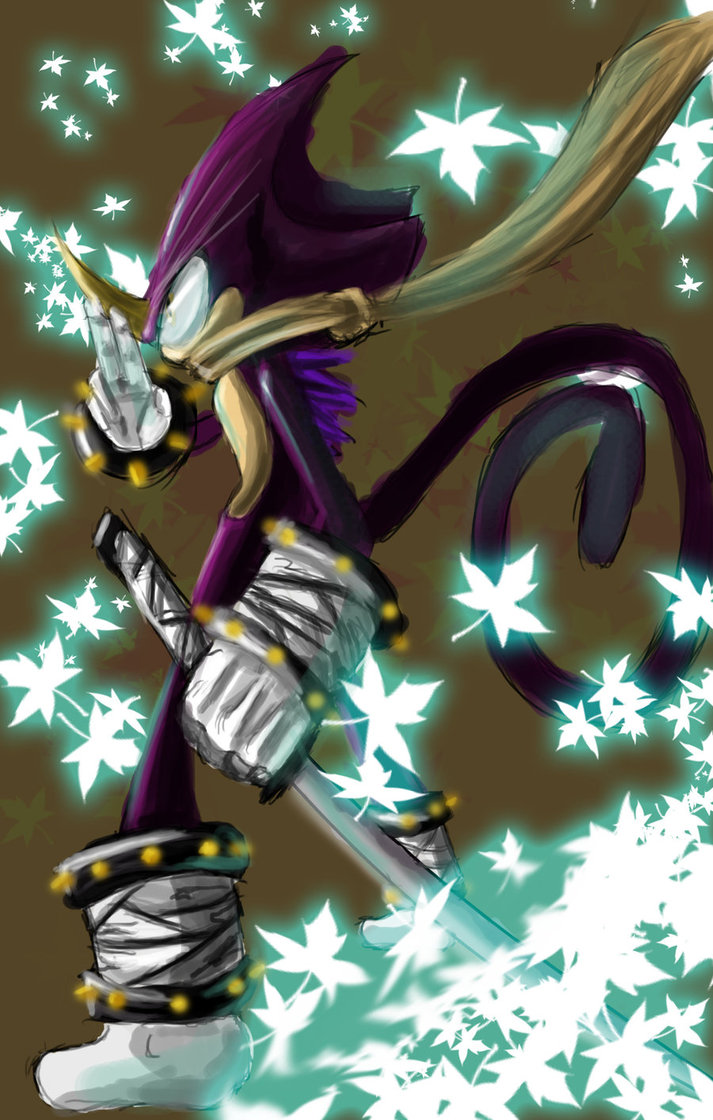 Espio the Chameleon is a Mobian from Rainbow Valley on Angel Island, and also a member of the Dragon Kingdom's Shinobi Clan. He is one of the original members of the Chaotix and his ability to camouflage makes him a formidable opponent. While he tends to prefer performing missions on his own, Espio also works well as a team player in the Chaotix.

Being a great ninja assassin Espio is both stealthy and cunning, preferring to take out his opponent before they even see him, but sometimes his talents make him a little overconfident. 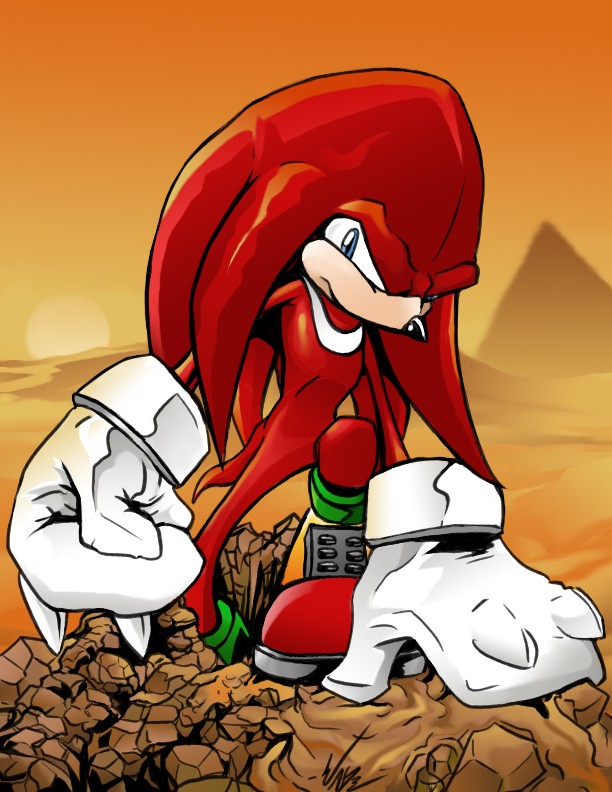 Knuckles is honest, independent, short-tempered, headstrong, devoted to his duty and somewhat gullible. He is very serious and usually likes to be by himself, but can be relied upon to help out whenever the planet needs saving. In all versions of the Sonic universe Knuckles has a rivalry in some form with Sonic. This might however stem from the fact that he appears to be sometimes jealous of Sonic's independent nature and freedom.

Despite his rough and somewhat distrusting demeanor, Knuckles holds a strong belief in the good of others, but because of his lack of social ingenuity, it makes Knuckles very naive. Since he has a history of being easily tricked by Eggman—namely into believing Sonic is the bad guy—it has become a recurring theme in the Sonic series, even to the point of being a running gag; particularly when Sonic shouts, "Way to go, Knucklehead!", or, "You let Eggman trick you again?!". According to the Sonic Riders: Zero Gravity instruction booklet, he has gotten better about this and is more suspicious concerning Eggman's trickery. But despite this rivalry, Knuckles is always willing to help out his friends in situations. He is also shown to feel quite angered whenever he finds out that he's been tricked but quickly regains enough of his composure to immediately start working towards a resolution.

Knuckles is also the current and last known member of the Order of Guardian's. A group sworn to protect the chaos emeralds and the master emerald at any cost.